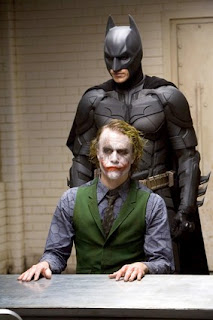 Michael Robinson, the Motion Picture Assn. of America's director of North American anti-piracy, said all the studios had improved security at post-production facilities. The trade group, in turn, uses a combination of gumshoe tactics and technology to crack down on piracy after the fact, going so far as to follow suspected pirates into theaters.

"At any given time, there are only a handful of truly professional camcorders out there who are recording," said Robinson, who spent 30 years in law enforcement, including a dozen years as head of the Michigan state police. But all it takes is one good-quality recording to generate thousands of Internet downloads and bootlegged DVDs sold at swap meets.

MPAA investigators used the lure of "The Dark Knight" to catch a suspected bootlegger in the act during a 9:40 a.m. showing in a theater in a southeast suburb of Kansas City, Mo.

A Lee's Summit Police Department spokesman said the MPAA investigators spotted the man in the back row of the theater, trying to cloak his video camera with black tarps as he allegedly made an illicit recording. A subsequent police search of the man's home turned up hundreds of DVDs that are believed to be pirated, the spokesman said. The case has been referred to the FBI.

"This wasn't necessarily one of our most covert operations," Robinson said. The investigators in the theater looked like G-men from central casting, wearing MPAA letters emblazoned on their shirts. "It was kind of brazen on this guy's part. Maybe he thought all the MPAA did was rate the movies."
Publicadas por Unknown a la/s 8:38 a. m.