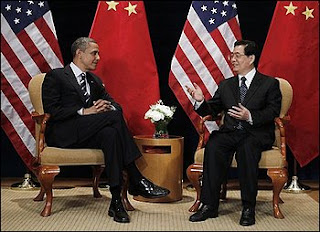 Obama holding first China state dinner in 13 years
By DARLENE SUPERVILLE
The Associated Press
Tuesday, January 18, 2011; 6:38 PM
WASHINGTON -- Feeling snubbed, slighted even, when he visited five years ago, Chinese President Hu Jintao is getting a do-over - plus the White House state dinner he sought back then but was denied.
Wednesday's opulent, black-tie affair with President Barack Obama - the grandest of White House soirees - will mark the first such event in China's honor in 13 years and could help smooth tensions between the world's two largest economies.
Some big questions remain: Who will cook? Who is coming to dinner? Can the White House avoid mistakes like those that marred the reception when a protocol-conscious Hu arrived for an April 2006 summit?
For starters, Hu was unhappy that President George W. Bush opted for lunch over a state dinner.
Bush held few state dinners as president, preferring workmanlike visits with foreign leaders over eating meals in a tuxedo. He also was sensitive to concerns in the U.S. about human rights in China and was reluctant to be seen as going all out for Hu with a state dinner.
But then Hu's pomp-filled welcome on the South Lawn was spoiled when a woman protesting China's treatment of the banned Falun Gong spiritual movement began shouting during his remarks. Bush apologized after he and Hu went into the Oval Office.
Compounding the insult, a White House announcer called China the "Republic of China."
That's the formal name for Taiwan, the democratic island that autocratic China claims as its territory.
Wednesday's affair will return the hospitality that Obama was shown at a state dinner in Beijing on his November 2009 visit.
A personal relationship between the two leaders is important for cooperation on several pressing issues in the time left on both of their terms in office, Asia watchers say. The visit is probably the last to Washington as president for Hu, a hydroelectric engineer who has ruled since 2002. He is expected to relinquish his leadership of the Communist Party next year and the presidency the year after.
"The only way you can move policy is at the very top, and it requires a personal connection," said Victor Cha, director of Asian affairs on Bush's National Security Council and currently a senior adviser at the Center for Strategic and International Studies. "Maybe this visit will be an opportunity to create some of that."
Hu is getting plenty of face time with Obama, including a second dinner Tuesday night after he arrives in Washington. The more intimate meal, closed to media coverage, also will include Secretary of State Hillary Rodham Clinton, national security adviserTom Donilon and Hu aides.
Wednesday's schedule calls for a formal arrival ceremony on the South Lawn, a one-on-one meeting between Obama and Hu, an expanded meeting between them that includes aides, a news conference and, finally, dinner.
It will be Obama's third state dinner. He held dinners for India in 2009 and Mexico last year.
For each dinner, Mrs. Obama - who is responsible for planning them with the White House social secretary - recruited a guest chef to help prepare the meal. But there was no word yet on who might cook for Hu.
In keeping with its usual practice, the White House held tight to details about the menu, the decor, where dinner will be served and what Mrs. Obama will wear until hours before the event begins.
But some tidbits began trickling out Tuesday.
House Speaker John Boehner, R-Ohio, has declined to attend, according to his spokesman and White
House press secretary Robert Gibbs. Members of the congressional leadership from both parties were invited, Gibbs said.
Boehner spokesman Brendan Buck noted Hu's plans to visit Congress the next day. His boss didn't attend the India and Mexico dinners either.

"The speaker is looking forward to his meeting with President Hu on Thursday, which he believes will be a productive setting for substantive discussions," Buck said.
The White House seemed miffed by Boehner's decision.
"We have invited . leaders from both parties, and we hoped that because of the importance of the (U.S.-China) relationship that they would attend," Gibbs said Tuesday.
Two other top congressional leaders, Sens. Harry Reid, R-Nev., and Mitch McConnell, R-Ky., will also be absent. Both are traveling, their offices said.
Actor Jackie Chan is confirmed.
President Bill Clinton and first lady Hillary Rodham Clinton welcomed President Jiang Zemin and his wife, Madame Wang Yeping, in October 1997, serving chilled lobster in tarragon sauce, pepper-crusted Oregon beef and whipped Yukon Gold potatoes to more than 230 guests seated elbow-to-elbow in the East Room.
Dinner tickets were highly sought and the lucky holders pointed to one of Clinton's chief aims: access to China's consumer market of more than 1 billion people. The guest list included chief executives from Xerox, PepsiCo, Walt Disney Co. and General Motors Corp.
The National Symphony Orchestra provided after-dinner entertainment, including the American classics "An American in Paris" by George Gershwin and "Stars and Stripes Forever" by John Philip Sousa.
White House officials suggested at the time that Jiang might be tempted to get up on stage. At a dinner the year before in the Philippines, he surprised his host by singing "Love Me Tender" and "Swanee River."
Could Hu succumb to similar temptation? He is said to have been a skilled ballroom dancer in college.
---
Associated Press writer Nancy Benac contributed to this report.
Publicadas por Unknown a la/s 9:39 p. m.