Why have millions of Colombians fled home? 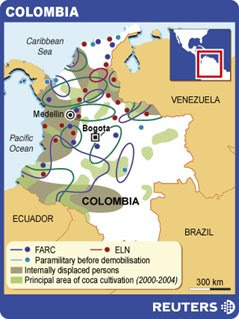 Why have millions of Colombians fled home?

More than four decades of conflict have turned Colombia into one of the world's worst humanitarian hotspots, with millions caught up in the crossfire between soldiers, leftist rebels, cocaine smugglers and far-right paramilitary militias.

Threats, intimidation, assassinations and massacres have forced about 3 million Colombians from their homes in the countryside - the second-highest rate of internally displaced people in the world after Sudan - while more than 40,000 people have been killed since the start of the 1990s.

A hardline conservative government - popular with many people for cutting crime but criticised by human rights activists for taking U.S. money to fund a clumsy crackdown on cocaine production - has persuaded thousands of right-wing paramilitaries to disarm. It has also engaged the second-largest guerrilla movement in talks about peace talks. But the largest rebel group refuses to even come to the table, although it has released some hostages after Venezuelan mediation.
Publicadas por Unknown a la/s 11:48 a. m.