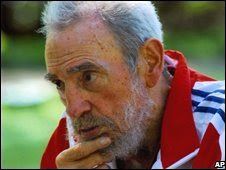 Castro criticised the Farc for using "cruel methods of kidnapping"

Cuba's former President Fidel Castro has called on the Colombian Farc rebel movement to release all of its remaining hostages.

His comments follow the rescue of Colombian politician Ingrid Betancourt and 14 others on Wednesday.

He said he had energetically criticised the "cruel methods of kidnapping and holding prisoners in the jungle".
But at the same time, Mr Castro added the rebel movement should not lay down its weapons.

He said that, during the past 50 years, those rebel groups that had yielded "did not survive to see the peace".
"I have openly and energetically criticised the objectively cruel methods of kidnapping and holding prisoners in the jungle," he wrote in an internet article posted on Sunday."If I may dare to suggest something to the Farc guerrillas, it is that they simply, by whatever means at their disposal, declare that they have unconditionally freed all the hostages and prisoners still under their control."

Fidel Castro's revolution in Cuba served as an inspiration to the Farc when it formed in the 1960s.

BBC Americas analyst Warren Bull says that with their movement in disarray the rebels may decide that the advice of a master strategist like Fidel Castro is not to be ignored if they want to ensure their long-term survival.

In June, Venezuelan President Hugo Chavez called on them to end their four-decade struggle and release all their hostages.
Tricked

Earlier, Ms Betancourt said she was planning to write a play about her experience of being held hostage by the Colombian rebels for six years.

Ms Betancourt wants to write a play about her captivity. She also said she had been given a clean bill of health after undergoing medical tests following her release from the Colombian jungle on Wednesday.

The former Colombian presidential candidate, who has dual French-Colombian nationality, was freed along with 14 other hostages after their captors were apparently tricked into handing them over to army personnel disguised as independent agency staff.

On Friday Ms Betancourt - who grew up, studied and raised her family in France - was flown from Colombia to Paris on a French presidential plane.
Publicadas por Unknown a la/s 10:58 a. m.