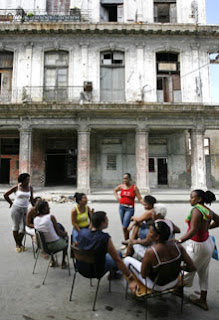 Pointers to a coming liberalisation

"WE HAVE a system in which anything you do is either forbidden or compulsory," complains Miguel, an academic and a member of Cuba's ruling Communist Party. "Perhaps we need to change that to become more efficient." He notes angrily that what he earns in a month, a trainee waiter can pick up in tips in a day in the island's tourist hotels. It is a common complaint, and only one of many. But now it is Cuba's government that is encouraging everyone to grumble.

ReutersGrumbling for the revolution
Though independent economists doubt official claims that Cuba's economy is growing at around 10% a year, they agree that it is expanding again after a decade of privation. That is mainly thanks to aid from Venezuela and trade with China. There are fewer power cuts and more buses on the streets. But wages are still below their level of 1989. Food is rationed or expensive and medicines are often in short supply. This week the education minister admitted that low pay was prompting an "exodus" of teachers from schools.

Raúl Castro, who took over as Cuba's acting president in July 2006 when his elder brother, Fidel, had intestinal surgery, seems to be aware of the popular frustration. Acknowledging that the economy needed "structural and conceptual changes", in July he called for an "open debate" on what to do. Nothing should be off the agenda, he insisted.

The debate has taken place at local branches of the Communist Party, as well as trade unions and other mass organisations. At each meeting, a notetaker has recorded without attribution the criticisms and suggestions. Over the next two months the results will be analysed. Cuba-watchers reckon that, after a slow start, the debate has been franker and more wide-ranging than the last such exercise held in the early 1990s, after the collapse of the Soviet Union, the island's sponsor.

Apart from petty corruption and slovenly officials, the main gripes have been low pay, rising income inequality, inefficiency, waste and asphyxiating bureaucracy. Loyal Communist militants have joined ordinary people in criticising defects in the prized health and education systems, including Cuba's policy of sending some 25,000 doctors and other specialists to support Hugo Chávez's "Bolivarian Revolution" in Venezuela. (Mr Chávez pays Cuba some $3 billion-4 billion a year, partly in oil, for their services.)

How will Raúl Castro respond to all this? Unlike Fidel, he is thought to favour the course pursued by China and Vietnam, in which markets and private investment have been combined with Communist political control. Even before the debate began, government economists had been studying measures such as allowing more self-employment and private or co-operative ownership of small and medium-sized businesses, as well as reforming land tenure and freeing agricultural markets.

Under Raúl Castro the government has already been a bit more welcoming of foreign investment. He has also said that wages need to rise, though that will have to be accompanied by changes in prices and the official exchange rate.

How much will really change? The first announcements are expected by the end of December. They are likely to include a bit more scope for private initiative and for markets and prices, but all within an economy and society still dominated by the state. Officials insist that what Fidel Castro calls the "pure poison" of "neo-liberal formulae" will not be swallowed. The official mantra is that rather than copying any foreign model, policy changes will comprise "a Cuban response to the Cuban reality". As long as Fidel continues to hover in the background—in a recent video with Mr Chávez he seemed stronger—he may inhibit any real liberalisation.

But the direction seems clear. Even some of the dissidents on the island, such as Oscar Espinosa Chepe, an economist, foresee gradual economic liberalisation, though others are more sceptical. "A turning point has been reached," says Anicia García, director of the University of Havana's Centre for the Study of the Cuban Economy. Most Cubans seem to think so, and even more hope so.
Publicadas por Unknown a la/s 5:35 p. m.