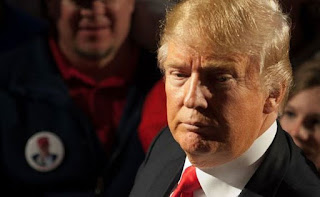 for Carolina Jaimes B

His style is confrontational. It is disrespectful, rude and knows no limits. Venezuelans know well that way of doing politics. Trump does not want to be "politically correct".

"Like poles repel, opposite poles attract." This is a law and it is true not only in physics. In human relationships it is common. And it is a fixed policy: the ends are similar, although their doctrines are radically opposed.
I watched the Republican campaign for the presidential candidate Donald Trump where it seems that is about to clinch the victory, think of what it is like Chavez and of course, his son and heir Maduro.
What makes a people tipping over to support an aggressive, segregationist and obtuse leader? It has nothing to do with education: remember that the most educated people in the world bought the speech of Adolf Hitler. Nor does it have to do with religion in the name of God have been committed horrible crimes throughout history. I think it has more to do with instincts and passions and definitely needed more than education or religion to go against the grain.
Trump went even further-in the same style of Chavez as a candidate, offering fry adecos oil and pour muriatic acid to the Supreme Court then (as I heard him speak at an event in Maracay) - and spoke public to "kill those who disagreed with him." First time in the history of the United States that a candidate provides such nonsense on television.
Forward and backward, half joking and half serious, he said amid cheering followers. Trump has no limits on what he says and pathetically style that attracts a lot of Americans. So much so that the same Republicans are in a sort of "all against Trump" to see if they stop the madness that can become the candidate.
Freedom of expression? It can not be "free" to use an expression that breaks with civility, democracy and respect for those who think differently. In another act, which referred to Trump had to hit his critics, a follower, John McGraw, he hits a black man, Rakeem Jones, who attended the rally.
The worst is that the security officers tried to attack as if it was the attacker: he was handcuffed and taken into custody, while the attacker was allowed to return to his post.
A couple of days later, Corey Lewandowski, campaign manager Trump hit the journalist Michelle Fields. When questioned, she replied that she "just wanted attention."
Special mention Trump's ideas to "expand the laws to include torture". harshly he criticized the "sentimentality" Barack Obama about it. "We have to be tougher, rougher. To those (dissidents, enemies) have to drown them in boxes, "he said. Trump masterfully handles public opinion, as did Chavez.
What will the military? Gen. Michael Hayden, former director of the National Security Agency and the CIA, against whom also charged Trump told MSNBC: "The military will not obey orders that violate laws. It is not mutiny, not coup. They are American soldiers who refuse to violate the law. "
Hopefully Americans do not have to go through what we went through us. Here we have seen several seasons of the series of terror. Unfortunately, no one chastens from somebody else ...