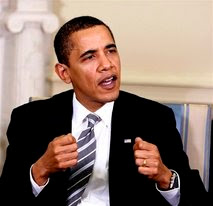 WASHINGTON — The White House on Monday cast Barack Obama's first presidential trip south of the border as a chance to revitalize relations with an entire hemisphere of nations.

Obama on Thursday is traveling to Mexico City, a clear signal of support for President Felipe Calderon as the U.S. and Mexico grapple with the deadly flow of drugs and weapons. Obama is then spending Friday through Sunday in the twin-island Caribbean nation of Trinidad and Tobago for the Summit of the Americas, a gathering of 34 Western Hemisphere nations.

"The perception coming up from the south (is) that in recent years the United States has turned its attention elsewhere, has neglected its relationships in this part of the world," said Jeffrey Davidow, Obama's principal adviser for the summit, told reporters Monday night.

"Whether one agrees with that perception or not, it certainly is a very strongly felt perception," he said. "And I think this summit will give him the opportunity to meet with all the heads of state, listen to them, exchange views, and come away with new ideas."

Cuba, as an undemocratic nation, is excluded from the summit. But its relationship with the United States and its role in the hemisphere are sure to be discussed. Obama on Monday lifted restrictions on Cuban-Americans who want to travel to and send money to relatives on the communist island, a move promised in his campaign and timed ahead of the summit to help set a productive tone.

In previewing the trip, White House aides said they could not yet provide details about which leaders Obama would be meeting with one-on-one while in Trinidad. They also said Obama would be heading to the summit with concrete proposals but declined to name what they were.

Instead, the White House spoke of priority themes: rallying support for bottom-up economic reforms, particularly those that help the "poorest of the poor;" working with other nations to expand renewable energy and reduce global warming; and improving public safety.

Shaking the global recession is the dominant topic on the agenda.

The timing comes as many nations in the hemisphere have felt the crushing effects of an economic swoon after years of relative growth. Analysts say the summit is unlikely to yield any big breakthroughs but could set a new tone to relations, particularly given Obama's popularity in the region and his promises of multilateralism.

The first and only country Obama will visit on his way to the summit is Mexico. His administration so far has made a notable, public show of diplomacy toward the country.

"It's a message of admiration for the courageous steps that President Calderon has undertaken," said Denis McDonough, one of Obama's senior foreign policy advisers. "It is meant to send a signal of respect, mutual respect with our Mexican neighbors."

As Mexico cracks down on organized crime, violence among the drug cartels, their rivals and soldiers have led to thousands of deaths and crime that has spilled across the border into the U.S.

Mexico has slapped tariffs on nearly 90 U.S. products in retaliation for a U.S. decision to cancel a cross-border program that gave Mexican truckers access north of the border.

McDonough said the administration is working with Congress and Mexico on a resolution, but added: "I think it's premature to anticipate a very specific announcement on that."

On comprehensive immigration reform, which collapsed in Congress during President George W. Bush's administration, White House aides say Obama remains committed to it. Obama, already dealing with an enormous agenda, is expected to try to begin an immigration effort this year.

Dan Restrepo, the senior director for Western Hemisphere affairs, said immigration and the treatment of immigrants is important to Obama and Calderon. He did not answer whether it would be on the agenda for the two leaders' meetings on Thursday in Mexico.
Publicadas por Unknown a la/s 9:58 p. m.