The Tyranny of Expediency 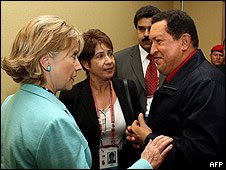 Neo-dictatorship is a form of government disguised as democracy whose constitution is only respected when convenient. The difference between a formal dictatorship under Fidel Castro or Augusto Pinochet and neo-dictatorship is that formal dictatorships concentrate all powers with no tolerance zone. A neo-dictatorship concentrates power in a single party and political elite, doing away with political pluralism and the rule of law, but because this model needs to appear democratic, it allows for a small margin of tolerance. When the tolerable space is altered, totalitarianism appears, with full State control over institutions.

The main examples of this political model are Peronism, General Juan Velasco Alvarado of Peru and Hugo Chavez in Venezuela. In these regimes, the nimbus of admission and recognition that characterizes negotiation is removed, and negotiation becomes just an instrument, usable by angels or villains. Our presuppositions about negotiation are removed once we look closer.

In an ideal world...

To resolve conflicts while avoiding the use of force, it is said, one must negotiate, which requires that both parties are willing to compromise. Neither one can expect to win everything. If both negotiate in good faith, they can always find a fair solution. During a multifaceted conflict, the less controversial issues should be solved first: agreement will lead to further agreement, even though each side has an immovable minimum position. A negotiator should never make a threat he won't carry out.

Without common interest there is nothing to negotiate for; without conflict, nothing to negotiate about. Perhaps one should distinguish between two kinds of common interests: an identical interest in a single arrangement or object that benefits both parties and that can be brought about only by joining forces, like the US-Mexico agreement to fight drug and weapon traffic; and a complementary interest in an exchange of different objects. In this case, the negotiation of an explicit quid pro quo might have given rise to new demands and invited more haggling and tugging than the arrangement, which the parties never discussed and never explicitly settled.

The deep hostility between countries like the US and Cuba makes formal talks less likely to harmonize the policy of openness to remove the old trade embargo, especially while still having a strong formal dictatorship.

Nonetheless, negotiation plays an important role in formalizing turning points in international relations, in catalyzing or at least clarifying changes that were caused by tacit bargaining or other processes, and in working out those finer shades in new arrangements that the brute interplay of latent strength cannot define.

Negotiation with a neo-dictatorship is more complicated because this model of government has not decided whether it is democratic or authoritarian. The relationship between the US and Venezuela is an example. Both leaders differ in behavior and morals. Chavez seeks friendship with cynical ways, which is highly dangerous as the power of oil makes any balance harder to achieve.

Neo-dictatorships can suddenly shift their alliances, so their power is highly unstable. Chavez finds himself in a precarious position: his friends in ALBA, Bolivia, Ecuador and Nicaragua, were prepared to veto the decision of the 5th Summit of the Americas in Trinidad and Tobago.

But how to do this if Chavez wants to be friends with Obama? Very easy. Chavez is a real political animal. He can turn his back on his friends from ALBA to negotiate a more convenient deal: that Obama recognizes him as a leader. And that is precisely the danger of negotiating with a neo-dictator.
Publicadas por Unknown a la/s 9:25 a. m.