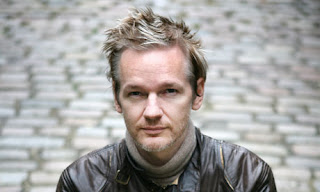 Fwoggie
I'll start the ball rolling with a question. You're an Australian passport holder - would you want return to your own country or is this now out of the question due to potentially being arrested on arrival for releasing cables relating to Australian diplomats and polices?


Julian Assange
I am an Australian citizen and I miss my country a great deal. However, during the last weeks the Australian prime minister, Julia Gillard, and the attorney general, Robert McClelland, have made it clear that not only is my return is impossible but that they are actively working to assist the United States government in its attacks on myself and our people. This brings into question what does it mean to be an Australian citizen - does that mean anything at all? Or are we all to be treated like David Hicks at the first possible opportunity merely so that Australian politicians and diplomats can be invited to the best US embassy cocktail parties.

girish89
How do you think you have changed world affairs?
And if you call all the attention you've been given-credit ... shouldn't the mole or source receive a word of praise from you?


Julian Assange
For the past four years one of our goals has been to lionise the source who take the real risks in nearly every journalistic disclosure and without whose efforts, journalists would be nothing. If indeed it is the case, as alleged by the Pentagon, that the young soldier - Bradley Manning - is behind some of our recent disclosures, then he is without doubt an unparalleled hero.

Daithi
Have you released, or will you release, cables (either in the last few days or with the Afghan and Iraq war logs) with the names of Afghan informants or anything else like so?
Are you willing to censor (sorry for using the term) any names that you feel might land people in danger from reprisals??
By the way, I think history will absolve you. Well done!!!


Julian Assange
WikiLeaks has a four-year publishing history. During that time there has been no credible allegation, even by organisations like the Pentagon that even a single person has come to harm as a result of our activities. This is despite much-attempted manipulation and spin trying to lead people to a counter-factual conclusion. We do not expect any change in this regard.

distrot
The State Dept is mulling over the issue of whether you are a journalist or not. Are you a journalist? As far as delivering information that someone [anyone] does not want seen is concerned, does it matter if you are a 'journalist' or not?

Julian Assange
I coauthored my first nonfiction book by the time I was 25. I have been involved in nonfiction documentaries, newspapers, TV and internet since that time. However, it is not necessary to debate whether I am a journalist, or how our people mysteriously are alleged to cease to be journalists when they start writing for our organisaiton. Although I still write, research and investigate my role is primarily that of a publisher and editor-in-chief who organises and directs other journalists.

achanth
Mr Assange,
have there ever been documents forwarded to you which deal with the topic of UFOs or extraterrestrials?

Julian Assange:
Many weirdos email us about UFOs or how they discovered that they were the anti-christ whilst talking with their ex-wife at a garden party over a pot-plant. However, as yet they have not satisfied two of our publishing rules.
1) that the documents not be self-authored;
2) that they be original.
However, it is worth noting that in yet-to-be-published parts of the cablegate archive there are indeed references to UFOs.

gnosticheresy
What happened to all the other documents that were on Wikileaks prior to these series of "megaleaks"? Will you put them back online at some stage ("technical difficulties" permitting)?

Julian Assange:
Many of these are still available at mirror.wikileaks.info and the rest will be returning as soon as we can find a moment to do address the engineering complexities. Since April of this year our timetable has not been our own, rather it has been one that has centred on the moves of abusive elements of the United States government against us. But rest assured I am deeply unhappy that the three-and-a-half years of my work and others is not easily available or searchable by the general public.

CrisShutlar
Have you expected this level of impact all over the world? Do you fear for your security?

Julian Assange:
I always believed that WikiLeaks as a concept would perform a global role and to some degree it was clear that is was doing that as far back as 2007 when it changed the result of the Kenyan general election. I thought it would take two years instead of four to be recognised by others as having this important role, so we are still a little behind schedule and have much more work to do. The threats against our lives are a matter of public record, however, we are taking the appropriate precautions to the degree that we are able when dealing with a super power.

JAnthony
Julian.
I am a former British diplomat. In the course of my former duties I helped to coordinate multilateral action against a brutal regime in the Balkans, impose sanctions on a renegade state threatening ethnic cleansing, and negotiate a debt relief programme for an impoverished nation. None of this would have been possible without the security and secrecy of diplomatic correspondence, and the protection of that correspondence from publication under the laws of the UK and many other liberal and democratic states. An embassy which cannot securely offer advice or pass messages back to London is an embassy which cannot operate. Diplomacy cannot operate without discretion and the
protection of sources. This applies to the UK and the UN as much as the US.

In publishing this massive volume of correspondence, Wikileaks is not highlighting specific cases of wrongdoing but undermining the entire process of diplomacy. If you can publish US cables then you can publish UK telegrams and UN emails.

My question to you is: why should we not hold you personally responsible when next an international crisis goes unresolved because diplomats cannot function.

Julian Assange:
If you trim the vast editorial letter to the singular question actually asked, I would be happy to give it my attention.

cargun
Mr Assange,
Can you explain the censorship of identities as XXXXX's in the revealed cables? Some critical identities are left as is, whereas some are XXXXX'd. Some cables are partially revealed. Who can make such critical decisons, but the US gov't? As far as we know your request for such help was rejected by the State department. Also is there an order in the release of cable or are they randomly selected?
Thank you.

Julian Assange:
The cables we have release correspond to stories released by our main stream media partners and ourselves. They have been redacted by the journalists working on the stories, as these people must know the material well in order to write about it. The redactions are then reviewed by at least one other journalist or editor, and we review samples supplied by the other organisations to make sure the process is working.

rszopa
Annoying as it may be, the DDoS seems to be good publicity (if anything, it adds to your credibility). So is getting kicked out of AWS. Do you agree with this statement? Were you planning for it?
Thank you for doing what you are doing.

Julian Assange:
Since 2007 we have been deliberately placing some of our servers in jurisdictions that we suspected suffered a free speech deficit inorder to separate rhetoric from reality. Amazon was one of these cases.

abbeherrera
You started something that nobody can stop. The Beginning of a New World. Remember, that community is behind you and support you (from Slovakia).
Do you have leaks on ACTA?


Julian Assange:
Yes, we have leaks on the Anti-Counterfeiting Trade Agreement, a trojan horse trade agreement designed from the very beginning to satisfy big players in the US copyright and patent industries. In fact, it was WikiLeaks that first drew ACTA to the public's attention - with a leak.

people1st
Tom Flanagan, a senior adviser to Canadian Prime Minister recently stated "I think Assange should be assassinated ... I think Obama should put out a contract ... I wouldn't feel unhappy if Assange does disappear."
How do you feel about this?


Julian Assange. Photograph: Carmen Valino for the Guardian
Julian Assange:
It is correct that Mr. Flanagan and the others seriously making these statements should be charged with incitement to commit murder.