Electronic Voting Vulnerable to Fraud
The Venezuelan referendum of Aug 15, 2004, illustrates the dangers of this polling method

There is no doubt that the "old-fashioned" ballot box system is a far better way to collect votes than the newer electronic method. In fact electronic voting is very dangerous and harmful to any country that desires transparency in its final results.

There is already sufficient evidence that electronic voting is an evil solution. Its use in various states of the U.S.A. has given rise to fraud, likewise in Venezuela and the recent election in Mexico, where doubts about the transparency of the results have led to political quarrels.

Research carried out in Venezuela revealed several ways in which electronic voting can cause problems. The research was carried out at the time of the recall referendum of the mandate of Hugo Chavez, president of Venezuela, on Aug 15 2004.

The research showed that the purchase of an automated voting system is in violation of Venezuelan law, which specifies that voting should be manual and secret.

The automated voting system's software was not updated in such a way that would have guaranteed their operation only by authorized personnel. The software was not adequately tested and it was found that it could be interfered with, so that a vote for candidate A could be assigned to candidate B.

It was also found that the electronic equipment was not adequately tested. Unsupervised soldiers were allowed to transfer the equipment from one place to another and there were no safeguards against interference by other people.

There was a fingerprint capture system that was used to identify voters. This meant that votes were not secret and people voting for the opposition could later find that they were discriminated against. During the recall petition the database "remembered" the voters' previous decisions and this enabled the manipulation of the flow of voters.

When the votes were audited a random sample was not selected, instead the selection was manipulated.

Voting information was also allowed to pass through intermediaries, allowing for further manipulation, before arriving at the principal center.
©2006 OhmyNews

An Interview with Dan Gillmor

The Internet is becoming more and more interactive. Thanks to blogs, wikis, citizen newspapers and other Websites there are now many places were users can produce content.

These instances have been dubbed Web 3.0.

Web 1.0 and Web 2.0 consisted of flat texts, among them the faithful transcriptions of newspapers without a greater development of design or updates.

Web 3.0 recognizes the amazing possibility of including multimedia within the stories.

I decided to discuss this phenomenon further with Dan Gillmor, founder and director of Citizen Media, an initiative to heighten and extend grassroots journalism.

His book We, the Media is a well known publication among those interested in grassroots journalism.

I spoke to Mr Gillmor at the OhmyNews International Citizen Reporters' Forum in Seoul in July 2006.

What do you say to people who say that blogs and citizen journalism are just a passing fad?

There is always a lot of interest in something new, and then people wonder if it is a fad. I don't think this is the case with blogging or citizen journalism. Many bloggers do stop after a while, but many more take up blogging. Citizen journalism is very new, meanwhile; we are only just beginning to figure out how it will work.

What are the strong and weak points of citizen journalism?

The strongest point is that there is no barrier to entry. Anyone can try it, and when a large number of people try anything we always find at least a few who do it well. Citizen journalists are covering topics that traditional media organizations don't cover, which means we get more journalism about "niche" topics.

The weakest point is that there are key principles in quality journalism, and not every citizen journalist either knows what they are or cares. We need to find ways to bring the high-quality material to the surface.

What is the role of journalism?

The most important role of journalism in any society is to have a better informed citizenry, so people can make better decisions about their lives and the course of their societies.

Has the population fully understood the power they have in the new Internet reality?

No, we're not even close to achieving this. It will take many years, perhaps decades, before we understand the medium well enough, and have good enough tools, to organize ourselves as we should. Collaboration and communication are the essential values of the Net, in my view.

There is a digital divide between the countries that are developed and those that are not. Is this digital divide also visible in Internet content too and the use of the Net for citizen journalism?

Technological improvements will make the hardware affordable for an increasing percentage of humanity. Someday, the $100 Internet computer will be an expensive device, not a goal that sounds inexpensive.

But the divide will exist as long as some societies have no access to modern technology, but more important is the gap between those who don't struggle every day to survive and those who must. We have bigger problems on the planet than access to the Net.
Publicadas por Unknown a la/s 6:44 p. m. No hay comentarios.:

The Map of Happiness

The Map of Happiness

Published 2006-08-02 06:38 (KST) 230 years after John Locke and Adam Smith guaranteed the American people the right to the pursuit of happiness in the Declaration of Independence, a global study of happiness has finally appeared.

Conducted by Adrian White, a psychologist at the University of Leicester, U.K., the study has resulted in a world map of happiness. The British psychologist analysed data published by the CIA, UNESCO, the WHO and several other organizations measuring data from over 80,000 people worldwide.

And the winner is... Denmark.

This comes as quite a surprise for most people, since the country in northern Europe is widely known for its high suicide rate. The other Scandinavian countries, score very well, too, though they all have a relatively mild climate and long winters.

Canada also hosts a significant 10th place, though the country suffers from the same phenomenon as the Scandinavian countries. All in all, the inhabitants of countries with a cold climate are surprisingly very happy.

But there is one big exception: Russia. It comes in at 167 and is thus one of the world's unhappiest nations.

So what about the United States, the country, where the pursuit of happiness is written into the constitution? Americans can consider themselves very happy people, too. The world's most powerful country ranks 23rd of the 178 countries listed in the survey. Moreover, other studies found that Republicans are generally happier than Democrats.

Another surprise: The notoriously "depressive" Germans are the world's 35th happiest people, though they steadily head in their holidays to Italy, partly because of the kind and happy Italians, who as a matter of fact rank only 50th on the list, which is still relatively high.

Capitalism can also be seen as a reliable factor of happiness. Communist countries, such as China (82nd), Cuba (83rd) and Russia rank poorly.

Moreover, according to the British study, Asian countries are generally among the least happy nations. Japan is only in 90th place. You might explain this because most Japanese people work long hours and often live in big polluted cities.

Looking at the map you can also see that the rich continents, Northern America, Europe and Australia (26th) are usually happy.

They are closely followed by the less rich, but much sultrier inhabitants of South America. Sadly, the world's poorest continent, Africa, is also the world's least happy. 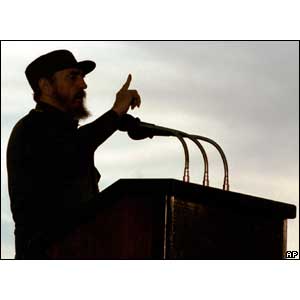 Cuba, the only communist country of Latin America has been governed for more than 40 years by only one president: Fidel Castro.

Today Fidel Castro, 80 years old and in delicate health, has transferred the powers to his brother, which has created a great questioning about the new political power in Cuba.

The Cuban revolution began in the year 1959, and since 1962 the U.S. organized a commercial blockade, while the government of the island sought the support of the USSR.

Since the USSR has disappeared, the government of Castro has intensified its actions against its political adversaries, and even also against some collaborators who are viewed as too moderate, such as former Foreign Minister Roberto Robaina.

The government condemned the opposition and arrested 74 dissidents, which was criticized by the European Union (E.U.).

The governments of Brazil and Venezuela financially support the Cuban government, as has China since the visit of the President Hu Jintao in the year of 2004.

An analysis of the actions of the Cuban government turns up the following keywords: revolution, repression, prison sentence, sanctions, embargoes, and dissident. Now the key question is, with Raul Castro will these intolerant words continue appearing, or will there be changes?

The future of Cuba is uncertain, because first one must evaluate the new functions of Raul Castro (the brother).

Nevertheless, Fidel's illness is big news, and almost all the newspapers and TV channels are closely following this political drama.
©2006 OhmyNews
by Alfredo Ascanio