In the link of above the interesting development of one of the more active virtual communities and of greater technological reputation is described. Today I was again visitor in first stage the area of reception of Tapped In participating in tour on the use by professors of these virtual spaces. There I have my virtual office there, but I had participated little in the conferences that are offered by this community.
Publicadas por Unknown a la/s 2:20 p. m. No hay comentarios.: 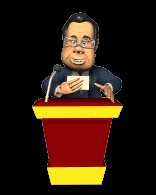 Across the globe, countries that discourage free speech have followed their citizens into the blogosphere. According to one count, in the last two years at least 30 bloggers (and there are no doubt more) have been interrogated, arrested, tortured and sentenced to long prison terms for the "crime" of speaking critically about their governments. Regardless of your culture, your country, your politics or religion, we believe you deserve to speak your mind without falling afoul of state power. Unfortunately, what you deserve and what you get are not always the same thing. So, for those of you who wish to speak out on your blogs, but who do not wish to risk imprisonment or worse for doing so, we have prepared guides that will help you to blog more safely by blogging more anonymously.

But please note: Blogging can never be completely anonymous. With enough time, resources and political will, a group or government can discover who you are. We cannot guarantee that even if you follow the instructions on these guides to the letter that you will run no risk. You always take a chance when you speak your mind to people who cannot tolerate dissent. But we hope that these guides will enable you to minimize those risks, or at least be more aware of them.

Please think of what we've done here as a starting point. We encourage you to expand, update and edit the existing guides. If your country, area or language is not represented, we hope you will take advantage of the resources we have provided and build your own anonymous blogging guides. Above all, as you help to develop this resource, we wish you to stay safe and free and speaking to the world as your conscience dictates. Also,Google's new China search engine not only censors many Web sites that question the Chinese government, but it goes further than similar services from Microsoft and Yahoo by targeting teen pregnancy, homosexuality, dating, beer and jokes.

A wiki is a web site that anyone can make changes to and all previous versions are permanently viewable in an archive. To make changes here you can log in with any name and email, and the word "blogsafe4u". We hope that these guides will improve with user participation. For help using this wiki, see Wiki Style. To learn more about wikis in general see Wikipedia's definition of wiki.

Andy Steele lives just a few blocks from the campus of Black Hills State University in Spearfish, S.D., so commuting to class isn't the problem. But he doesn't like lectures much, isn't a morning person, and wants time during the day to restore motorcycles.

So Steele, a full-time senior business major, has been taking as many classes as he can from the South Dakota state system's online offerings. He gets better grades and learns more, he says, and insists he isn't missing out on the college experience.

''I still know a lot of people from my first two years living on campus, and I still meet a lot of people,'' he says. But now, he sets his own schedule.

At least 2.3 million people took some kind of online course in 2004, according to a recent survey by The Sloan Consortium, an online education group, and two-thirds of colleges offering ''face-to-face'' courses also offer online ones. But what were once two distinct types of classes are looking more and more alike -- and often dipping into the same pool of students.

At some schools, online courses -- originally intended for nontraditional students living far from campus -- have proved surprisingly popular with on-campus students. A recent study by South Dakota's Board of Regents found 42 percent of the students enrolled in its distance-education courses weren't so distant: they were located on campus at the university that was hosting the online course.

Numbers vary depending on the policies of particular colleges, but other schools also have students mixing and matching online and ''face-to-face'' credits. Motives range from lifestyle to accommodating a job schedule to getting into high-demand courses.

Washington State had about 325 on-campus undergraduates taking one or more distance courses last year. As many as 9,000 students took both distance and in-person classes at Arizona State last year.

''Business is really about providing options to their customers, and that's really what we want to do,'' said Sheila Aaker, extended services coordinator at Black Hills State.

Still, the trend poses something of a dilemma for universities.

They are reluctant to fill slots intended for distance students with on-campus ones who are just too lazy to get up for class. On the other hand, if they insist the online courses are just as good, it's hard to tell students they can't take them. And with the student population rising and pressing many colleges for space, they may have little choice.
Publicadas por Unknown a la/s 9:15 a. m. No hay comentarios.: