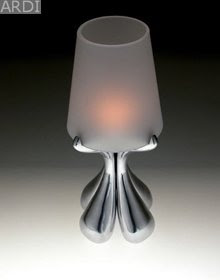 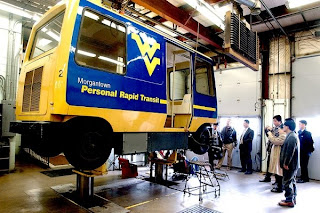 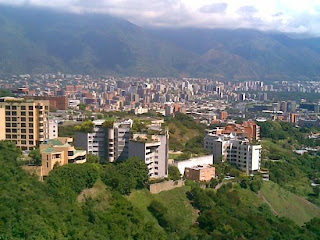 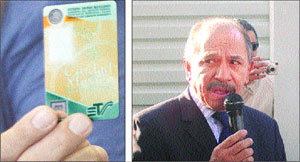 CARACAS, Venezuela – President Hugo Chavez's opponents made important gains in Venezuela's local elections, capturing the Caracas mayor's office and three of the most populous states, but his allies won a strong majority.

With more than 95 percent of votes counted, pro-Chavez candidates kept gubernatorial posts in 17 states, while the opposition won five states. Chavez trumpeted his party's domination of Sunday's vote as a sign to continue driving Venezuela toward "21st-century socialism."

"The people are telling me: 'Chavez continue down the same road,'" he said, hinting that he has not abandoned plans for constitutional changes that would expand his powers, push the economy toward socialism and allow him to run for re-election indefinitely.

Voters rejected the president's proposed overhaul of the constitution last year but Sunday's results clearly encouraged Chavez, who famously described U.S. President George W. Bush as the devil at the United Nations and has cultivated relations with U.S. antagonists in Cuba as well as Iran and more recently Russia.

Tibisay Lucena, president of Venezuela's election council, said the opposition won in the two most populous states — Miranda and Zulia — as well as Nueva Esparta, Carabobo and Tachira. Opposition candidate Antonio Ledezma defeated a close Chavez confidant to become the next mayor of Caracas, the South American nation's capital and largest city.

"I'm delighted, and a bit surprised, that our candidates won in some of the most important states," said Delsa Perez, a 45-year-old housewife who voted for Ledezma because she was fed up with the capital's garbage-strewn and potholed streets.

Chavez faced an emboldened opposition aiming to break his party's near total control over local offices. Although the president's allies held a majority of posts, Sunday's results gained new ground for his political adversaries.

Chavez's brother, Adan, won a tight race to succeed their father as governor in the president's home state of Barinas.

Turnout topped 65 percent among the 16.8 million registered voters, a new high for a local election in Venezuela, Lucena said.

Ledezma called for cooperation between Chavez's government and opposition mayors, saying "I invite the president of the republic to work together to rescue Caracas" — a city blighted by crime, trash and crumbling infrastructure.

A similar invitation was offered by Henrique Capriles, who defeated one of Chavez's closest confidants to become the next governor of Miranda state, which includes part of Caracas.

"What's important is that the map of Venezuela has started to change," said opposition leader Manuel Rosales, calling the victories important gains for the anti-Chavez camp.

"We are the country's foremost political force," said Muller, flanked by other red-clad Chavez allies. "We don't see an opposition victory on a political map painted red."

In 2004 state elections, Chavez allies swept all but two of 23 governorships and a majority of local offices. In this vote, 22 governorships, 330 mayoral posts and other offices were up for grabs.

After a decade in office, the president still enjoys solid popularity, but last year's defeat of his attempt to abolish term limits energized the opposition, which has also sought to capitalize on complaints about unchecked corruption, rising crime, deteriorating public services and double-digit inflation.

At least 106 people were detained by authorities during the vote, many for destroying balloting materials such as voter receipts, the attorney general's office said. Six were arrested in Guarico state for allegedly attacking voters.

One person also was stabbed in a clash between government supporters and opponents in Bolivar state, but authorities said the vote largely went smoothly. 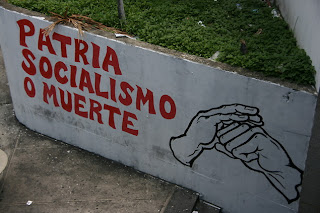 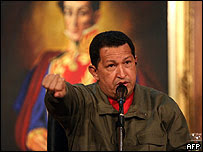 On Sunday, a Most Important Election in Venezuela

On Nov. 23 in Venezuela will be the most important vote of its political history.

The United Socialist Party of Venezuela (PSUV) wants, with the support of President Chavez, to introduce to Venezuela a neo-communist regime that is called "Socialism of the 21st Century." Opposition groups are united with the aim of fighting for a political system known as the Social Democracy.

This is the only opportunity open to Venezuela to introduce a multiparty political with the goal of seeking a balance of power in a country where supporters of President Chavez have all the powers (executive, legislative and judicial branches) and control in 20 States Country and in most municipalities.

With only one day for these important election. The national newspapers and TV are reporting on their political predictions.

The Venezuelan political system is fully automated and these elections are more complex than the previous ones, because everyone has to vote for five or seven choices at a time limit of three minutes.

Venezuelans are hoping that this activity is transparent and there is no fraud as in previous ballots. The Electoral Council has invited 170 people to observe this political process.

Then I will report forecasts for this important election.

The Journal Fifth Day 52 journalists from around the country have predicted the election this way:

In the CENTRAL REGION: Caracas, Miranda, Carabobo, Aragua and Guarico, the forecasts are:

CARACAS: The specialist's El Universal that the Mayor of Caracas may have a final "picture" between Antonio Ledezma and Aristobulo Isturiz. And the thought that in the Liberator municipality win Jorge Rodriguez to beat the opposition Stalin Gonzales.

The specialist of VEA Journal said that Aristobulo Isturiz and Jorge Rodriguez is the winner with 8 percent over their contenders from the opposition (Ledezma and Gonzalez).

The specialist for the newspaper El Nacional predicts: Aristobulo win in the Mayor and the municipality of Chacao the opposition win with Emilio Grateron and in the Libertador municipality win Jorge Rodriguez. In the municipality of Sucre there is a technical tie between Carlos Ocariz and Jesse Chacon.

MIRANDA: The El Universal believes that will win Governor Diosdado Cabello as though it has a high percentage of rejection he can win with a 36 percent. But Miguel said that there exists a technical tie. In contrast, the editor of the Journal Progress also says he believes that there is a technical tie. El Nacional said that the fighting is tough and may win Governor Diosdado Cabello of PSUV.

CARABOBO: In this state Henrique Salas Feo he has tops polls as Mario Silva (PSUV) does not have a high convening power and Acosta Carles want to repeat with his excellent publicity "we are together, so good ". The Daily Evening News said that polls taken for a winner Salas Feo, but Acosta Carles could win. The editor of La Costa believes that Salas Feo win and Mario Silva has a lot of rejection in Carabobo. Miguel also believes that Salas Feo win.

ARAGUA: The newspaper the Aragueno believes that there is a technical tie between Rafael Isea (PSUV) and Henry Rosales (which would be continuity of the Current Governor Didalco Bolivar). While it appears that ISEA is the first choice as candidate of the PSUV with 37 percent against 32 percent for Rosales. It's a very tough fight.

GUARICO: The editor of the newspaper Antenna thinks Lenny Mannuit should win and the loser would be William Lara (PSUV). It's a tough choice but Mannuit has many chances of winning said Miguel.

In the western region, comprising by states: Falcon, Lara, Cojedes, Barinas, Apure and Yaracuy, the forecasts are as follows:

FALCON: The candidate of the opposition Goyo Graterol has the potential to 5 percent on Stella Montilla. Miguel said that Stella's ruling coalition would win the governorship.

LARA: It seems that the candidate's PSUV Henry Falcon could win. Miguel says the same thing.

COJEDES: The choice is tough but the PSUV Teodoro Bolivar could win in front of Alberto Galindo. Miguel also believes that Bolivar will win.

BARINAS: it seems that Julio Cesar Reyes can win and Rafael Simon Jimenez may lose (unitary candidate of the opposition), but Adam Chavez's brother President Chavez will not win.

APURE: It is possible to win Jesus Aguilarte ( PSUV) and Miriam Montilla may lose. It's the same prognosis of Miguel.

In the Zulia Region: Gian Carlos Di Martino's PSUV lose in front of Pablo Perez that would be the Governor of Zulia.

In the Andean: consisting of the States Tachira, Trujillo and Merida forecasts are:

TACHIRA: Everything points to the possible candidacy of unitary Cesar Perez Vivas, although Leonaldo Salcedo appears to have the first option that is the candidate of the PSUV.

MERIDA: There is a technical tie between William Davila of the opposition and Marcos Diaz Oreland's PSUV, but Davila has a better chance.

TRUJILLO: A hard-fought contest between the PSUV Hugo Cabezas and Octaviano Mejias (Patriotic Alliance) and Enrique Catalan of the Opposition has no strength.

In EASTERN REGION: consisting of the States Anzoategui, Monagas, Nueva Esparta, Bolivar, Delta Amacuro and Sucre, the forecasts are:

ANZOATEGUI: Tarek William Saab's PSUV, has a chance to repeat as governor, with 30 percent on Gustavo Marcano of the opposition.

MONAGAS: It is possible that the PSUV Jose Briceno is the new governor of that state. A front Moncho Fuentes.

NUEVA ESPARTA: Can repeat Morel Rodriguez the current governor of the opposition and William Farinas (PSUV) will lose.
BOLIVAR: A very confusing choice but Rangel Gomez is leading the polls in front of Andres Velasquez, who has sounded much.

SUCRE: it seems that won the independent Eduardo Morales Gil.

WELL THIS IS THE SUBJECT OF ELECTIONS. IN SUMMARY, according to those forecasts:

The governing would win with the official party PSUV (United Socialist Party of Venezuela):

This is the start of searching for a better political balance in the country and to combat intolerance and unacceptable fact of political prisoners and waste the money of the people in political campaigning in the country and in other countries such as Cuba, Bolivia, Ecuador and Nicaragua.

Alfredo Ascanio is a professor of economics at Simon Bolivar University in Caracas, Venezuela.
©2008 OhmyNews
Other articles by reporter Alfredo Ascanio
Publicadas por Unknown a la/s 7:10 a. m. No hay comentarios.: